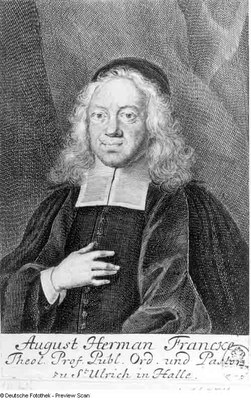 August Hermann Francke (1663–1727) was a key figure in Lutheran Pietism, an inner-protestant reform and renewal movement founded principally by Philipp Jakob Spener. Francke studied philosophy and theology, among other subjects, and at the University of Leipzig met Spener, who became a major influence. The improvement of the world by means of the betterment of man was Francke's vision, which focussed on the individual. In 1698, he founded an orphanage and a school for impoverished children at Halle (Saale), where he was also a professor at preacher at St. Ulrich's Church. This school, later to be known as the "Franckesche Stiftungen" (Francke Foundation), would within the space of a few decades become Europe's foremost Protestant educational institution, in which fundamental ideas of the Reformation were put into practice. Adherents of Halle Pietism were among the founders of the Danish-Halle Misiion, the first organised mission in Protestant history. The Tranquebar missionaries Bartholomäus Ziegenbalg and Heinrich Plütschau were also students of Francke's.