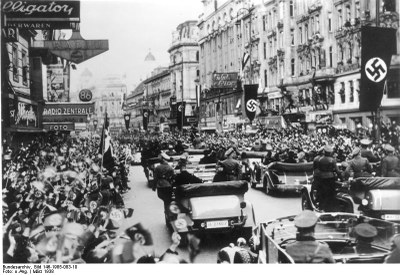 After the failed attempt of the "Anschluss" movement to unite Austria and Germany as one country in 1918, Austria was eventually annexed by Nazi Germany in the spring of 1938. This move was met with great enthusiasm and sympathy by many Austrians, so that Hitler and his entourage were greeted by cheering crowds lining the streets, when they reached Vienna on 15 March 1938. The photograph shows the masses on Mariahilfer Straße in central Vienna.