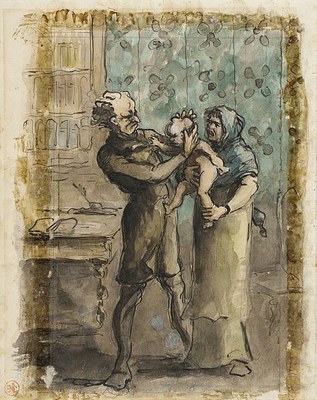 Phrenology was developed in the early 19th century by Franz Joseph Gall (1758–1828). The physician and anatomist attempted to situate certain human character traits and moods in specific parts of the brain. This approach was undergirded by the ideological assumption that the shape of the skull and the brain stood in direct relation to a person’s character and intellect. Criminals and members of non-white ethnicities were the preferred objects of phrenological study. In this satirical depiction by the French cartoonist Cham (1819–1879), an infant’s head is measured roughly by a phrenologist, to the obvious discomfort of both mother and child.