Comparison of Exposition Sites in Paris 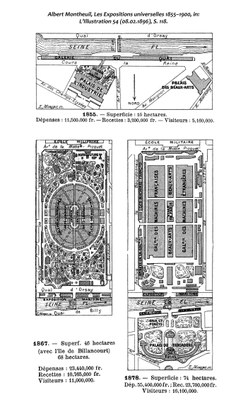 The sites of the five world’s fairs in Paris in the 19th century (1855, 1867, 1878, 1889, 1900) are placed in direct comparison here, albeit in different scales. From 1867 onward, all such expositions were held on the large, centrally located Champ de Mars. Through the inclusion of more and more areas, the total land used expanded far beyond the Champ de Mars from 1878 onward, and it ballooned between 1855 (16 hectares) and 1900 (108 hectares) by a factor of seven. By each adding a new monument to the urban fabric – in 1878 the Palais du Trocadéro which was only demolished in 1934, in 1889 the Eiffel Tower and in 1900 the Grand Palais, the Petit Palais and the Pont Alexandre III – the Parisian world’s fairs successively contributed to the embellishment and symbolic loading of an already important site of memory.

Click on the image to get a larger view.