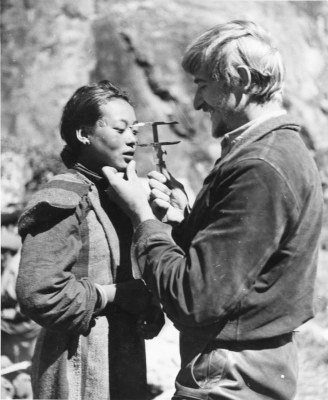 Phrenology developed into craniology and craniometry. This “science” of measuring skulls became widespread in the first half of the 20th century as a tool of so-called racial science and other burgeoning racist theories and the schools of anthropology and ethnography associated with them. The Nazi expedition to Tibet (1938) provides an example. The German researchers, led by the zoologist Ernst Schäfer, set out to study not only local flora and fauna, but also to gather data on the indigenous population. To this end, the anthropologist Bruno Beger (shown above), a member of the  Rasse- und Siedlungshauptamt-SS (SS Race and Settlement Main Office), measured members of various Tibetan peoples in hopes of illuminating the origin of the supposed Aryan race.