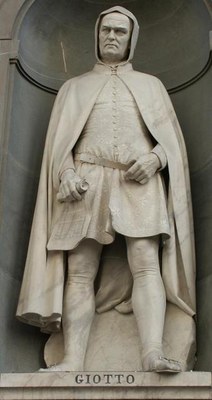 Giotto di Bondone, usually known only as Giotto, is generally considered the first in a line of great painters who contributed to the Italian Renaissance. His work marks a break with the previously dominant Byzantine style and a return to more natural, life-like depictions of the human form. The frescoes in Scrovegni Chapel in Padua, also known as the Arena Chapel, completed around 1305, are generally considered his masterpiece.