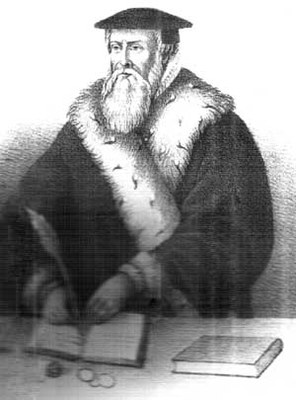 Hans Tausen was an evangelical theologian and reformer, who is often referred to as the "Danish Luther". A monk of the Knights of St. John of Jerusalem order from Viborg, he studied in Louvain, Wittenberg and Rostock. Though he had only spent a brief period in Wittenberg in 1523, his main influences came from there. Tausen translated some of Luther's writings and parts of the Old Testament into Danish, and he taught Hebrew at the University of Copenhagen in the 1530s. While Tausen's theology primarily consists of elements received from Wittenberg, influences from southern German theology (which had come to him through Prussia) were also conspicuous. In 1530, Tausen presented the Confessio Hafniensis at a Herredag. This first independent Danish statement of faith, deviated in important ways from the Wittenberg theological norm and from the Confessio Augustana, which had appeared a short time before. The Confessio Hafniensis only acknowledged secular authority, declared the Bible to be the only standard for secular and Christian life, elevated the "priesthood of all believers" above the office of the priesthood, and contained a concept of the Eucharist which was close to that of Zwingli.