Interior View of the Jacob's Temple in Seesen 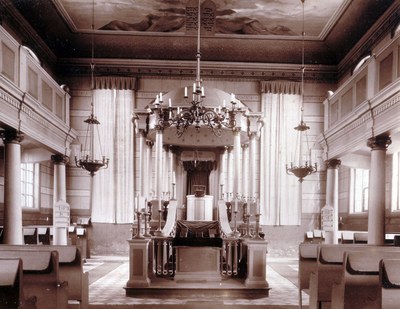 The synagogue in Seesen, the Jacob's Temple, was inaugurated in 1810. It was Reform Judaism' first synagogue. It had a bell tower, an organ and its interior held characteristics of a Protestant church. The benches for men were placed to the right and left of a central aisle, as in Christian churches. Starting point for the reforms were the efforts undertaken by Israel Jacobson (1768–1828), the president of the Israelite Church Authority, founded in 1808, in the Kingdom of Westphalia. Jacobson's modernisations were accompanied by religious service reforms, but these were soon discarded. The synagogue, built on the grounds of the Jacobson School, was destroyed in 1938 during the November pogroms.