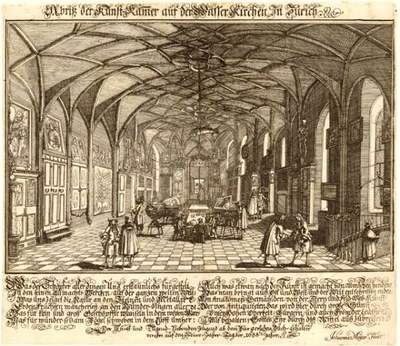 The Zurich "burgesses' library" was first opened to the public on New Year's Day, 1634. The miscellaneous items in the collection had not yet been separated from the books. Not until 1667 was a stand-alone chamber of art and naturalia set up in the upper story. The inventory lists various artisanal and artistic objects (including, it seems, a collection of models typical of art chambers) as well as naturalia and coins and excavated objects from the local area. According to the tradition of genealogical self-reassurance cultivated by such institutions, paintings include portraits of digitaries and notables, in this case Swiss Calvinists alongside burgomasters and city councillors.