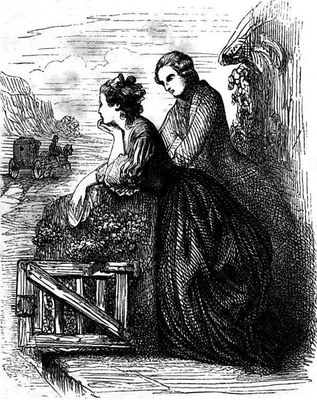 The romantic novel Julie, ou la Nouvelle Héloïse (1761) by Jean-Jacques Rousseau (1712–1778) became one of the most successful novels of the 18th century. Through letters, it tells the story of the unhappy love affair between the tutor Saint-Preux and his aristocratic pupil Julie d'Étange, who he is not allowed to marry because of the class difference. Instead, Julie marries Lord von Wolmar, though she retains the connection with her former tutor. The novel is primarily set in Vevey on Lake Geneva, which together with the Alpine landscape not only provides a backdrop for the strong feeling of the protagonists, but also influences the plot of the novel – for example, when Julie dies at the end of the novel as a result of hypothermia after rescuing her child, who had fallen into the water. This illustration depicts Julie with the mountains in the background, as she watches in the company of Saint-Preux as her husband departs.