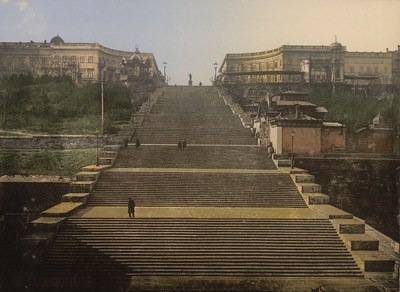 The Potemkin Stairway (known up to 1955 as the Boulevard Stairway or the Richelieu Stairway), which connects the city centre with the harbour, is a symbol of Odessa. It was built between 1837 and 1841, and measures 142 metres in length. It was already lauded by visitors to the city in the 19th century, such as Mark Twain, but it achieved greater fame as a result of the classic Sergei Eisenstein film Battleship Potemkin of 1925. Important scenes in the movie were filmed on the Potemkin Stairway, most notably the scene of the bloody suppression of a rebellion, during which a baby's pram famously rolls down the steps of the stairway.