Lorenzo the Magnificent Receives the Tribute of the Ambassadors 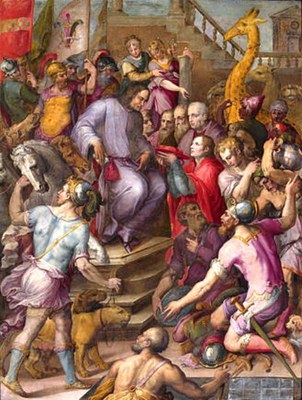 Lorenzo de' Medici (1449–1492) was the de facto ruler of the Florentine Republic. Known as Lorenzo the Magnificent (Lorenzo il Magnifico) in his lifetime, he was a magnate, diplomat and politician. He is also notable as a patron of scholarship and the arts, supporting artists such as Botticelli and Michelangelo. His death coincided with the end of the Golden Age of Florence.

Vasari’s painting shows Lorenzo receiving tributes from ambassadors, both from other Italian states and from foreign powers.