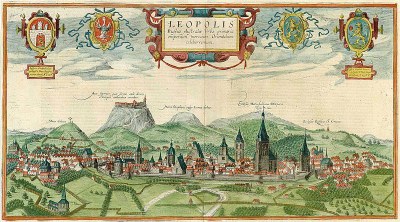 The city of Lviv in present-day Ukraine (Lemberg in German, Lvov in Russian, Lwów in Polish) was founded in 1256 by a prince of the Kievan Rus and became part of Poland in the 14th century. During the first Partition of Poland in 1772, Lviv was transferred to the Habsburg Empire. In 1918, Poland took possession of the city by military means. In 1941, it was incorporated into the Ukrainian Soviet Socialist Republic in the context of the Hitler-Stalin Pact. Due to this repeated change of owners, the city has been influenced by a variety cultures. Up to the Second World War, numerous Jews, Ukrainians, Armenians and Germans shared the city with the Polish majority. The city is currently predominantly inhabited by Ukrainians, though there are also groups of Russians, Belarussians and Poles.