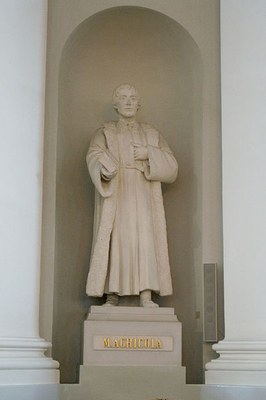 The Finnish reformer Mikael Agricola can be described as the father of the written Finnish language. He studied in Wittenberg from 1536 to 1539 under Luther, Melanchthon and Bugenhagen. After he returned to Finland, he became rector of the cathedral school in Turku, and in 1554 he became bishop of Turku. However, he only held this office for a short period, which was overshadowed by a war between Sweden and Russia. Agricola's magnum opus was a Finnish translation of the New Testament which was published in 1548. It was based on the Greek text published by Erasmus, Erasmus's Latin translation, the Latin Vulgate Bible, Luther's Bible translation, as well as the Swedish New Testament of 1526 and the Gustav Vasa Bible of 1541. Agricola's foreword and marginal glosses came mainly from Luther's German translation and the Gustav Vasa Bible.