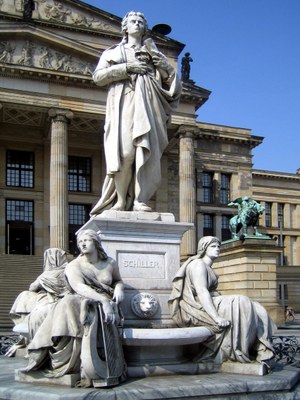 In 1859 celebrations commemorating Friedrich Schiller's (1759–1805) 100th birthday took place throughout Germany. On a side note these events also served as occasions for remembering the revolution of 1848/1849. Many cities and towns hosted parades in Schiller's honour and monuments of the dramatist and poet were erected. In Berlin the sculptor Reinhold Begas (1831–1911) was charged with designing and constructing a Schiller monument for the Gendarmenmarkt in central Berlin. The memorial shows Schiller surrounded by four sitting female figures, allegories of History, Lyric Poetry, Philosophy and Tragedy. Finally set up in 1872, the monument remained a central feature of the place until 1936 when it was dislocated in order to turn the Gendarmenmarkt into a parade ground. As part of a cultural exchange between East and West Berlin, the monument returned to its original location in 1988.