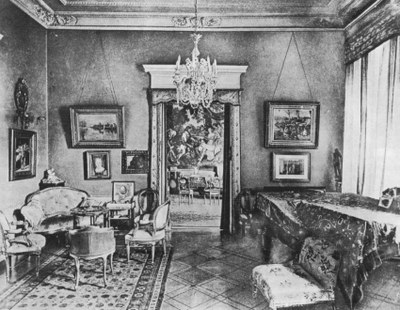 Carl Bernstein (1842–1894), professor of Roman law, and his wife Felicie (1850–1908) were the first collectors of French impressionist paintings in Germany. Between the 1880s and 1908, their literary salon in Berlin served as a meeting point for guests from the worlds of science and the arts, as well as an exhibition space for the works of the impressionists. In this way, the Bernsteins played an important role in the reception of impressionism in Germany. On the extreme left in this image of the Bernsteins' music room, one can see the painting of a vase with a bouquet of lilacs by Edouard Manet, which Felicie Bernstein later donated to the National Gallery in Berlin.