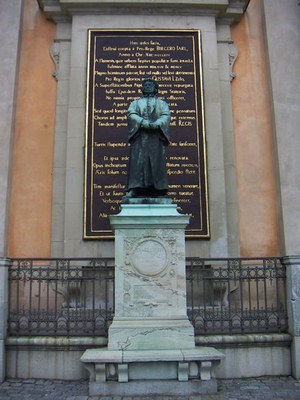 Olaus Petri was a central figure in the implementation of the Reformation in Sweden. As the first Swedish pupil of Luther, he returned to Sweden from Wittenberg University in 1518 and won Laurentius Andreae – who along with Olaus Petri and his brother Laurentius Petri is regarded as the foremost reformer of Sweden – over to the cause of the Reformation. Olaus Petri wrote polemical texts against the Mass, celibacy, the cult of the saints and monastic life, and he published a Mass and a liturgy in Swedish. In Petri's writings from the 1520s, Martin Luther is identified as the theological authority on which the Swedish Reformation is based. However, influences from the south-western German Reformation – transferred via connections with Prussia – were also conspicuous in his theology. In his early writings, his position on the Eucharist was close to the theology of Ulrich Zwingli.