Presidium of the First Israelite Synod in Leipzig 1869 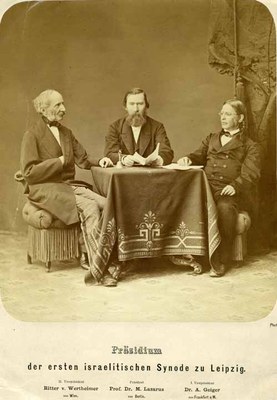 The first Israelite Synod, attended by rabbis, academics and leading laymen from all over Europe and North America, was held in Leipzig from 29 June to 4 July 1869. Participating members of the community were for the most part Reform Jews. The photograph shows the presidium of the synod: Moritz Lazarus (1824-1903, centre), Abraham Geiger (1810-1874, right) and Josef Ritter von Lazarus (1800-1887, left). During the synod, the founding of the German-Israelite Community Association took place, constituted as a secular Jewish community organisation and as the first large Jewish umbrella organisation, it comprised all of Germany.