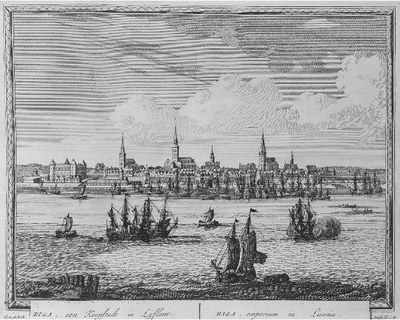 The city of Riga, initially a commercial centre on the River Dvina and subsequently the capital of Livonia, was founded in 1201 by the bishop of Bremen and was increasingly settled by German merchants. The city was part of the Hanseatic League. It was captured in the 16th century by Poland-Lithuania, and in the 17th century by Sweden. In the 18th century, the Russian Empire conquered the city, which continued to flourish economically, and made it one of the most important Russian ports, though German remained the official language of the city until 1891. When the independent republic of Latvia was founded after the First World War, Riga became its capital. In the aftermath of the Second World War, during which the territory changed hands between German and Soviet occupying forces, Latvia became the Latvian Soviet Socialist Republic, which it remained until 1991.