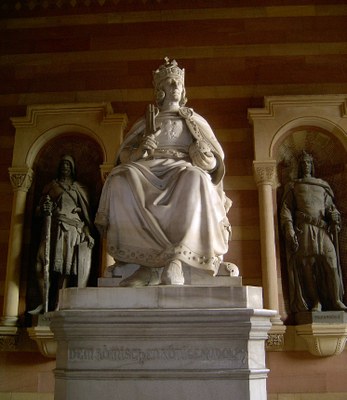 In 1273, at the age of 55, Rudolf of Habsburg (1218–1291) was elected as Roman-German King. This election ended the "Great Interregnum", the period which saw several kings reigning simultaneously. The first Habsburg King soon became a popular figure, not only in his own time but also in the 19th century. Paintings, ballads and monuments, such as Ludwig von Schwanthaler's (1802–1848) memorial at Speyer Cathedral, where Rudolf of Habsburg is buried, testify to the great interest in the Habsburg dynasty during the rise of German nationalism.