Simon Dubnow at the first YIVO Conference in Vilnius 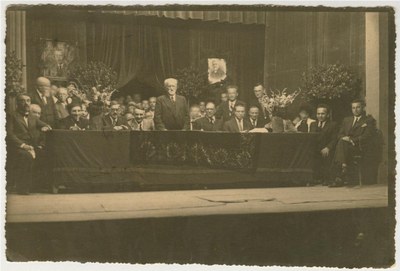 Simon Dubnow, who was born in 1860 in Mstislav/Belarus and raised in the traditional Jewish house of his grandfather, turned as a young man to the Haskalah and became active in the Soviet Union for the emancipation of the Russian Jews. In addition to his work as a publicist and politically active historian, Dubnow was the first scholar since Heinrich Graetz to produce a comprehensive history of the Jews. He advocated a secular Jewish diaspora nationalism and a transterritorial, transnational autonomy of the Jews, which was intended to ensure the legal equality of the Jewish minority and their right to govern themselves. Dubnow was murdered in 1941 by National Socialists during the violent dissolution of the Riga ghetto. The picture shows Simon Dubnow (standing) at the first international conference of the YIVO (Yidisher Visnshaftlekher Institut) in 1935 in Vilnius. The YIVO was established in 1925 as an academic institute for scholarship concerning Ashkenazim. Dubnow was cofounder and finally associate of the historical section of the institute. Since 1940 the YIVO has had its headquarters in New York (http://www.yivoinstitute.org).