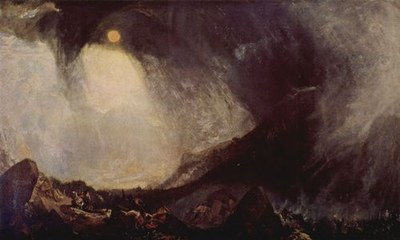 This painting by Joseph Mallord William Turner (1775–1851) shows the dark side of the Alps, which received increasing attention in painting and literature during the 19th century. In this painting, the mountains are both a threatening and a sublime backdrop to Hannibal's (247–183 BC) famous expedition.