Soldiers of the German Wehrmacht in Sevastopol, Crimea, 1942 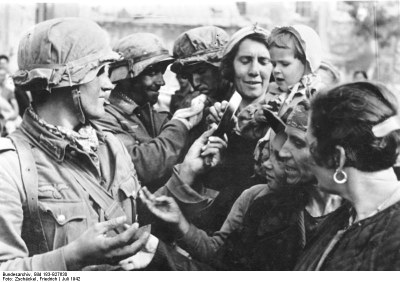 After protracted fighting in a number of phases from November 1941 onward, the German Wehrmacht finally captured the harbour city of Sevastopol in the Crimea in July of 1942. Sevastopol was of particular strategic importance as the base of the Black Sea fleet. Both sides suffered heavy losses during the battle, and the city itself was almost completely destroyed. For the civilian population, the weeks-long fighting and bombardment were very difficult. The photograph shows starving women and children surrounding German soldiers, who are distributing bread after capturing the city.