Synagogue Rules of the Jewish Community in Wetzlar of 1858 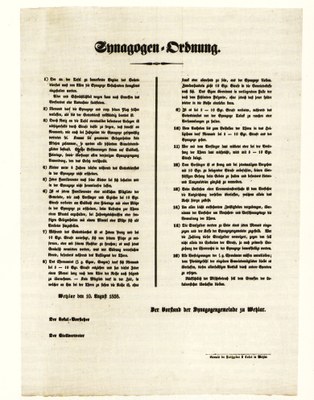 This is a reproduction of the synagogue rules of the Jewish Community in Wetzlar written in 1858. Synagogue rules were introduced to many Jewish communities in the 18th and 19th century, in all probability the result of growing Jewish emancipation and the demands of the Haskalah movement. The rules defined the conduct of community members during services. This included punishment for disorderly conduct as well as compliance with specific clothing regulations.