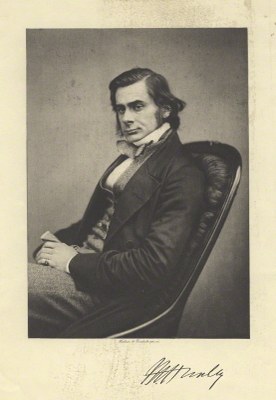 The English biologist Thomas Henry Huxley (1825–1895) is considered one of the most important champions of Charles Darwin’s theory of evolution. His own research and publications did much to further the development of the natural sciences. His essay Evidence as to Man's Place in Nature (1863) marked a crucial step in the discussion of the evolution of human beings. In 1869, he was among the founders of the journal Nature, which remains highly influential. Huxley’s popular essays, some of which presented Darwinian theory in the form of dialogues, broadened the influence of modern, empirical science in society. The portrait shows Huxley in 1857, three years after becoming professor of natural history at the Royal School of Mines (now part of Imperial College, London).