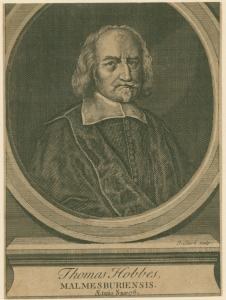 Heavily affected by the civil and revolutionary wars of his time, the English philosopher Thomas Hobbes sought a political order that was arranged according to scientific principles and which would prevent future revolutions. In his works on state theory (De cive, 1642; Leviathan, 1651), he takes as his centre point the endeavour of the human being to maximise happiness and minimise pain. A political system is thus well ordered if it optimises this endeavour. Hobbes contends that the human being is not by origin a social being and, in their natural state, humans are in constant competition ("homo homini lupus", "bellum omnium contra omnes"). According to Hobbes, this natural state of being could only be overcome by a contract, in which each human relinquishes his original rights to the benefit of the sovereign. If the sovereign were overthrown, the body politic would disintegrate into its individual constituents again; the human returns to its natural state.