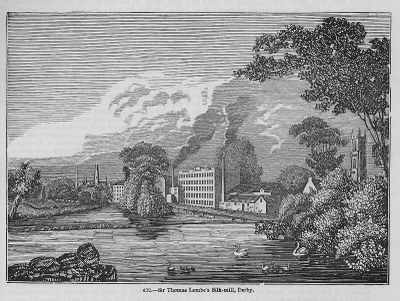 Two English textile factories built in the 18th century are contesters for the title of first modern factory, with each employing about 300 workers in a five-storey building: Thomas Lombe's (1685–1739) silk factory, completed in Derby in 1721, and Richard Arkwright's (1732–1792) Cromford mechanical textile mill of 1771. The early 18th-century textile industry in many respects paved the way for industrialization. What distinguished Lombe's silk factory from other proto-industrial factories is the large-scale use of machine power. The impetus came in large part from the Napoleonic wars around 1800, which made silk imports unreliable and expensive. The mechanization of silk production owed much to the adoption of Italian technology, obtained by Lome's brother, John, though espionage and smuggling.