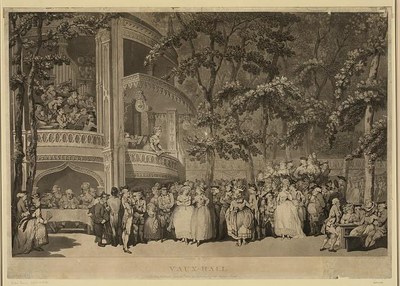 In 17th and 18th century England, pleasure gardens were social meeting places for the upper and middle classes. The best known was Vauxhall Gardens in London, which was opened in 1661. Pleasure gardens were imitated in France, where they became known as “les Wauxhalls”. At least ten such places of amusement opened in Paris between 1764 and 1789, and they could also be found in other French cities. The image depicts a fictional scene in London’s Vauxhall Gardens. On the upper left-hand side, on the pavilion’s balcony, the singer Elizabeth Weichsel (ca. 1765-1818) can be seen. Seated at the table is the writer and lexicographer Samuel Johnson (1709-1784), centre, with his later biographer James Boswell (1740-1795) and the writer and poet Oliver Goldsmith (1728-1774). On the far right of the image, the Prince of Wales, later George IV, can be seen whispering in the ear of the actress Mary Robinson (1757-1800), depicted here in the role of Perdita.