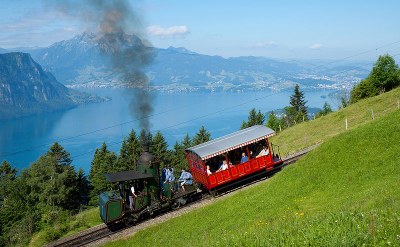 This cog railway built in 1871 runs up to the top of Mount Rigi near Lucerne, which has attracted tourists from all over Europe since the 19th century because of the beautiful view of the surrounding lakeland that it affords. In 1992, the Vitznau-Rigi railway, its competitor the Arth-Rigi railway, and a cable car system joined together to form the company Rigi Bahnen AG. The photo shows one of the last remaining Rigi steam engines travelling between Grubisbalm and Freibergen.

Engine 7 of the Vitznau-Rigi railway, one of the last remaining (if not the last) functioning steam engines with an upright boiler worldwide, travelling up to Mount Rigi. Between Grubisbalm and Freibergen, colour photograph, 2009, photographer: David Gubler; image source: Wikimedia Commons, http://commons.wikimedia.org/wiki/File:VRB_H_1-2_bei_Freibergen.jpg?uselang=de.