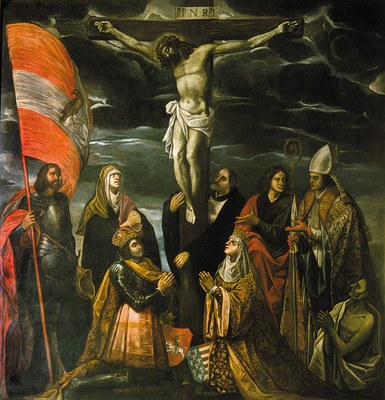 The famous Lithuanian grand prince Jogaila, who subsequently became King Władysław II Jagiełło (ca. 1348–1434), was crowned king of Poland in 1386 after his marriage to Hedwig of Anjou (ca. 1374–1399), the daughter of the king of Poland, Hungary and Croatia. The marriage of these two figures, who are depicted in the painting kneeing beneath Christ's cross, led not only to the conversion of Lithuania to Christianity, but also to a union of crowns between Poland and Lithuania which was to endure for four centuries. In 1569, the two states entered a union of states due to the lack of a successor to the throne. This union remained in existence until 1795.