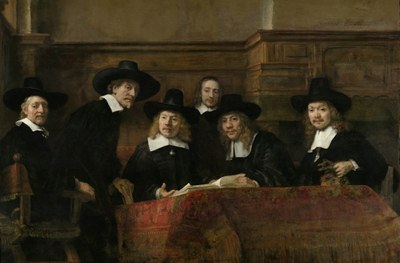 This painting shows a group of cloth inspectors in the hall of the Staalhof in the Amsterdam Staalstraat. The men are wearing the characteristic dark-coloured clothing with the white collar, the Geneva band, and the tall Dutch hat, which was even considered fashionable at court in Versailles for a time. It was normal etiquette to keep the hat on indoors, which was a sign of a high-ranking citizen. The man without a hat is therefore a servant. The ritual of hat-wearing involved raising the hat to a social superior. The colour black had its origins in the ethics of the Reformation, represented here by the presence of a clergyman in the background. His presence signifies the close connection between ethics and business.