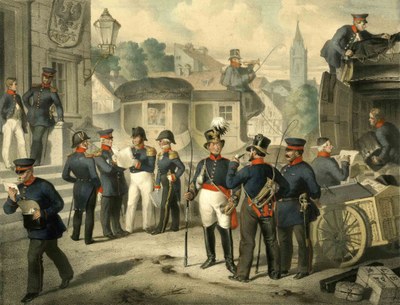 Postal uniforms were among the first civil uniforms to display strictly regulated badges. Civil uniforms were intended to display state legitimacy and authority, but also to regiment and discipline state servants in their physical appearance and, by extension, in their behaviour. The first regulations for Prussian postal uniforms were issued on 28 November, 1785 and prescribed a complete uniform set. However, the actual uniform was very similar to civilian clothing and, with drainpipe trousers and a waistcoat, resembled the tail-coat.