After the Battle of Singapore: The Capitulation of the Allies 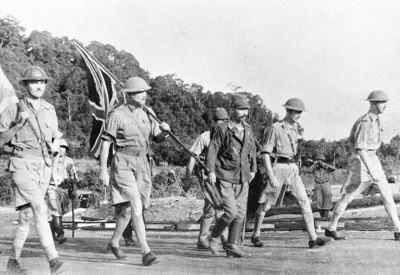 The Battle of Singapore, which was fought between Japanese and Allied forces between January 31 1941 and February 15 1942, ended with the capitulation of the Allies under the leadership of the commander Lieutenant-General Arthur Percival. In the photograph, Percival and his troops are on their way to the formal surrender on the afternoon of February 15. Led by a representative of the Japanese army, they are carrying the Union Jack and a truce flag, which can be identified at the left edge of the photograph.