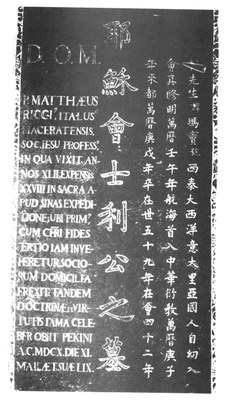 The translation of the Chinese inscription reads:  "Tomb of the Jesuit, the honourable Li. Master Li was called Madou [Matteo] and had the sobriquet Xitai [Wise Man from the West]. He was a native of the country of Italy in the Great Western Ocean. In his youth he entered the Society in order to cultivate perfection [of virtue]. In the renwu year of the Wanli reign the Ming Dynasty (1582) he came to China by sea and was the first to propagate the [holy] teachings [here]. In the gengzi year of the Wanli reign [1600] he went to the capital (Peking) and died in the gengxu year of the Wanli reign (1610) at the age of 59 years, of which 42 in the Society." (Malatesta / Zhiyu, Departed, Yet Present 1995, p. 132.)

Inscription on the tomb of Matteo Ricci (1552–1610), black-and-white photograph, unknown photographer; source: with the kind permission of the Ricci Institute, University of San Francisco.