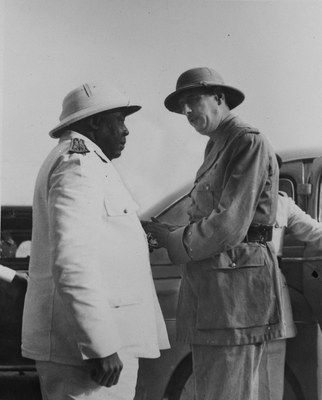 On August 26 1940, Félix Adolphe Éboué (1885–1944) (left) was the first governor of a French colony to support the exile government of Charles de Gaulle (1890–1970) (right). The photograph shows the two men greeting each other in Chad. As governor of French Equatorial Africa, Éboué promoted many natives within the colonial administration and initiated numerous reforms. In November 1941, he published a programme for a new model of colonial administration which incorporated African tribal traditions and the native elites, which was implemented before the end of the Second World War.