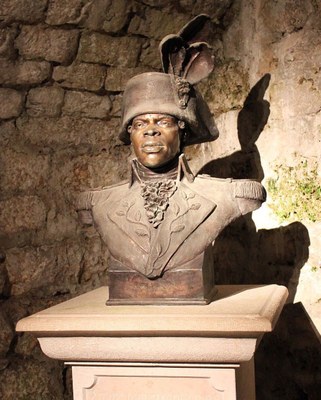 François Dominique Toussaint Louverture (1743–1803), who had been born as a slave, led the slave revolt in Saint Domingue in 1791. His political and military ability enabled him to expand his area of power over the years. In order to restrict Toussaint Louverture's influence, Napoleon sent an expeditionary force to the colony in 1802 and reintroduced the Code Noir, which regulated the contact with and the treatment of black slaves. Toussaint Louverture was captured and imprisoned in Château de Joux in France, where he died in his cell after eight months of imprisonment due to the conditions in which he was held. Today, a bronze bust in the castle in Jura commemorates the Haitian national hero.