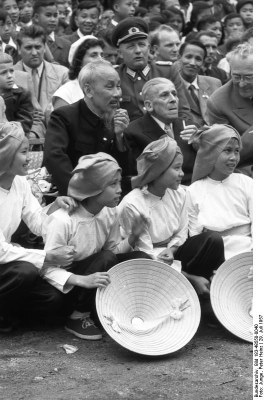 As a revolutionary and a politician, Hồ Chí Minh (1890–1969) fought for the independence of Vietnam. He was the first prime minister (1945–1955) and subsequently also became president (1955–1969) of the Democratic Republic of Vietnam (North Vietnam). In the summer of 1957, Hồ Chí Minh visited Dresden and spent an afternoon with Vietnamese children in Moritzburg. The Vietnamese were one of the very few immigrant communities in the GDR. From the 1950s, there was cooperation between North Vietnam and the German Democratic Republic, particularly in the area of education, and this cooperation was augmented continuously from 1973 onward. Hồ Chí Minh is in the centre of the photograph, with Otto Buchwitz, a member of the Central Committee of the SED, and Rudi Jahn, the chairman of the Council of the district of Dresden, to the right of him.