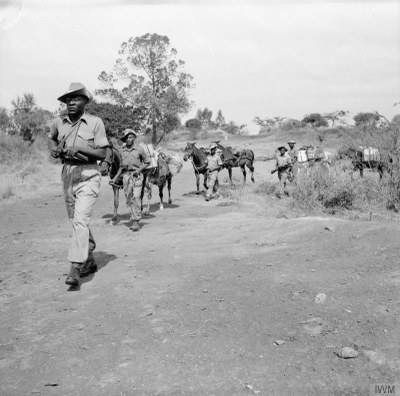 The origins of the term Mau Mau are unknown. It was used by the British to denote an independence movement in Kenya that drew its support from among the Kikuyu people. In the 1950s, it sought to put an end to British rule by means of a guerilla campaign. A particular grievance on the part of the Kikuyu was the expropriation of land by white settlers. The British responded with military force and by imprisoning large parts of the Kikuyu population in internment camps. Yet the rift also went through the native population. Although the Mau Mau Uprising was militarily unsuccessful, Kenya gained independence in 1963, in the course of the wave of decolonization sweeping across Africa at the time. – The photograph depicts African soldiers in the British army. In many places, European rule would have been impossible to uphold without such colonial troops.