Mikhail Gorbachev after the Soviet-American Summit in Reykjavik, Iceland 1986 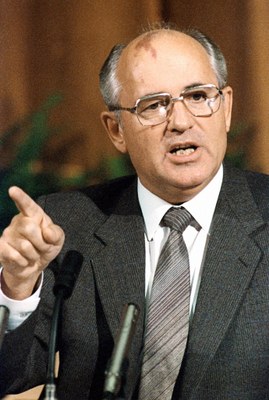 Mikhail Gorbachev (*1931) was elected General Secretary of the Communist Party of the Soviet Union in 1985. At the 27th Party Congress in February 1986, Gorbachev began the political implementation of the concepts of Glasnost (openness) and Perestroika (restructuring). As General Secretary, he also ordered the withdrawal of Soviet troops from Afghanistan, and admitted past political mistakes of the party and crimes committed during the Second World War. This photograph of him was taken at the press conference after the Soviet-American Summit in Reykjavik, Iceland in 1986. The meeting prepared the way for the so-called INF (Intermediate-Range Nuclear Forces) treaties, which were signed in December 1987 and enabled the dismantling of atomic intermediate-range missiles in Europe.