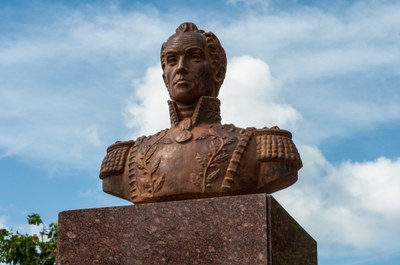 Simón Bolívar (1783–1830) led the independence movements in the present-day Latin American states of Venezuela, Columbia, Panamá, Ecuador, Peru and Bolivia. The Republic of Great Columbia which he had founded, split into the states of Ecuador, Venezuela and Columbia after his death. From the 1840s, Bolivar was revered as a national hero. His memory is celebrated most strongly in Latin America, where the state of Bolivia carries the name of the hero and Venezuela officially calls itself the Bolivarian Republic of Venezuela. In addition to a multitude of monuments dedicated to him in South America, such as this one on the Caribbean island of Isla Margarita, statues, busts, street names and parks all over the world are dedicated to the memory of El Libertador ("the liberator").