The Mau Mau Uprising in Kenya: Suspects being searched 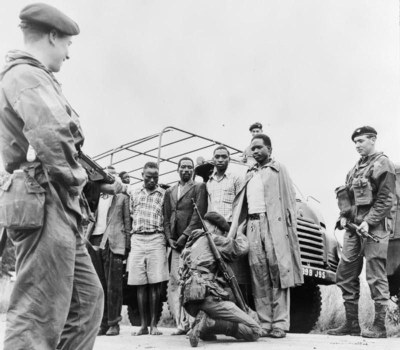 Due to the destruction of many documents, it is not known how many lives the Mau Mau Uprising claimed. While 63 British soldiers, 33 settlers and more than 1800 native policemen and auxiliary soldiers died, official estimates put the number of casualties among the rebels at 11.500. However, current estimations put the number at somewhere between 20.000 and 100.000. There was also widespread internment. Almost the entire Kikuyu population, which was deemed to be not loyal, was imprisoned in this way. In the photograph, British security forces are searching suspects who have been rounded up near Kanyuki during Operation Scaramouche.