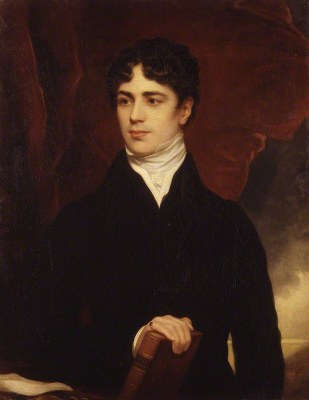 This portrait by Thomas Phillips, member of the Royal Academy, depicts John George Lambton (1792–1840), Earl of Durham (also Lord Durham). Educated at Eton, Durham entered the House of Commons in 1813, before being raised to the peerage and thus entering the House of Lords in 1828. At the time of his appointment as governor general of British North America in 1838, there were serious tensions between the colonial powers of Great Britain and France. Durham resigned just five months after his appointment, but his "Report on the Affairs of British North America" (1839) had a lasting effect. The concept of colonial self-administration under British suzerainty which he described in the report is viewed as having laid the basis for the subsequent development of the British Commonwealth.