Viceroy of India: Lord and Lady Mountbatten with Mahatma Gandhi, 1947 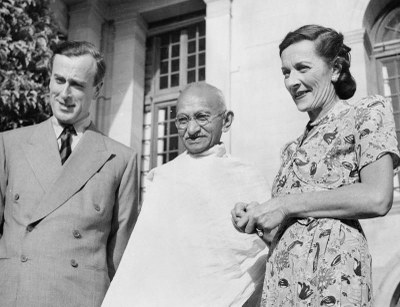 As viceroy of India, Lord Mountbatten had the task of preparing in short order for India's independence from Great Britain. Among the first duties of office of Lord and Lady Mountbatten in 1947 were meetings with Mahatma Gandhi (centre), the Congress leader Jawaharlal Nehru and the leader of the Muslims Muhammad Ali Jinnah. Soon after Mountbatten took office, tensions between Hindus and Muslims escalated, resulting in serious violence and eventually leading to the partition of India. The new dominion of Pakistan was founded on August 14 1947. One day later, a unified India followed suit, and was declared an independent state.