A Page from an Exile's Family Register 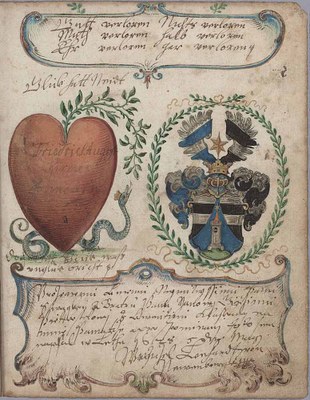 Johann Georg Pietikostel (Fünfkirchen) von Aventin was a chancery clerk in Prague, who emigrated along with thousands of Protestant Bohemians to the Electorate of Saxony in 1628. He remained for several years in the exile stronghold of Pirna on the Elbe and joined the Saxon-Swedish army in the temporary seizure of Prague in 1631. Shortly thereafter he had to flee again and subsequently lived in Saxony and Upper Lusatia. The image shows a page from his family register, in which his friends and comrades in exile inscribed their coats of arms and uplifting aphorisms. Numerous registers of this type have survived and present an important source for understanding how the emigrants communicated and how they made sense of their exile situation by creating new traditions.

Johann Georg Pietikostel (Fünfkirchen) von Aventin, family register with inscription and coat of arms of the owner and entries from 51 people in the years 1628–1637; source: courtesy of The Bancroft Library, University of California, Berkeley; call number: Fiche B4171 FG-1146, https://www.lib.berkeley.edu/news_events/fbg/fbg1146.html.