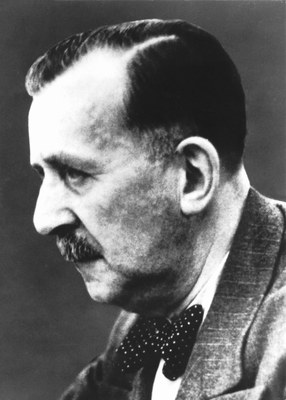 In contrast to his brother Thomas, Heinrich Mann thought of himself very early as a democratic and socialist writer. This was clearly demonstrated in his criticism of Wilhelminian society which reached its narrative high point in the novels Professor Unrat (1905) and Der Untertan (1918). As one of the leading representatives of the Weimar Republic (president of the section "writing and poetry" of the Prussian Academy of Art, 1931–1933) he warned against the downfall of democracy. He emigrated to France in 1933 where he wrote his literary masterpiece – the two-volume novel on the French King Heinrich IV. (1935, 1938). In 1940, Mann fled to the USA. He died just before he was to assume the presidency of the German Academy of Arts in the GDR.