Henry IV of France signs the "Edict of Nantes" 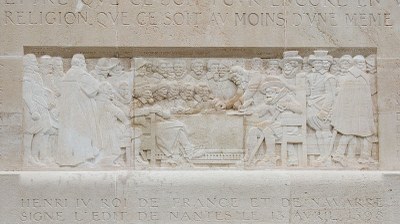 The Edict of Nantes was signed on 13 April 1598 by Henry IV of France (1553–1610). It guaranteed Huguenots in Catholic France substantial religious toleration and the full rights of citizens, while also specifying that Catholicism was the religion of the state. This brought an end to the Huguenot wars. The relief shown is part of the Reformation monument in Geneva, erected in 1909. It depicts the signing of the edict by Henry IV. The other reliefs on the 100-metre-long commemorative wall depict other pioneers and promoters of the Reformation.