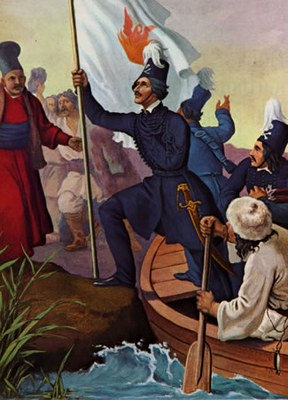 The officer and Phanariot Alexander Ypsilantis (1792–1828), the leader of the secret society Filiki Etaireia, sparked a first revolt against Ottoman rule by invading the Danubian Principalities with an army of 500 in 1821. This painting shows him in the symbolic act of crossing the river Pruth, which divided Bessarabia and the principality of Moldavia. The army’s march was stopped by the Ottomans after four months.