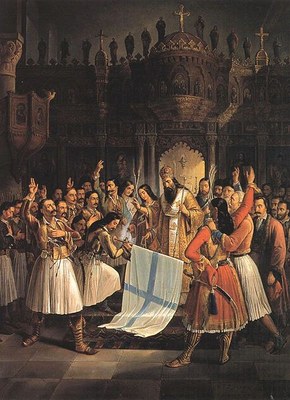 Many of those involved considered the Greek war of independence to be not least a religious conflict between Christians and Muslims. This is reflected in the choice of the revolutionary flag, displaying the Christian cross in blue (the colour of Orthodox Christians according to the dress code of the Ottoman Empire) on a white background. This painting also illustrates the support given to the revolution by large sections of the Orthodox clergy. The cross later became part of the Greek coat of arms and the national flag in use today.