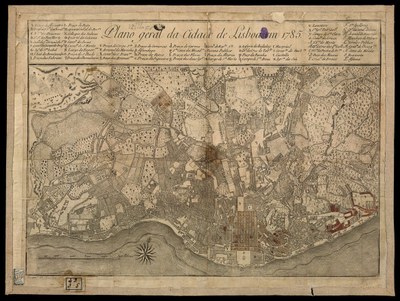 After Lisbon was severely damaged by the 1755 earthquake, rebuilding was begun under the direction of Sebastião José de Carvalho e Melo, the Marquês de Pombal (1699–1782). He decided to rebuild the city centre according to the modern ideas of the time. The strict orientation of the city centre along an axis can be seen at the bottom of the illustration (please click to enlarge). The Marquês de Pombal also took care to ensure the structural stability of the new buildings, the world's first to be designed with earthquake safety in mind.