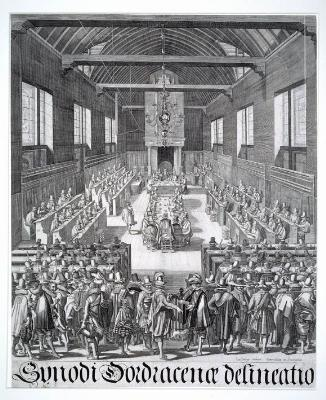 At the synod of Dort (also known as Dordt or Dordrecht), which took place from 13 November 1618 until 9 May 1619, members of the Dutch Reformed Church and representatives of Reformed Churches from abroad, e.g. England, Scotland, Germany and Switzerland, gathered to discuss and solve dogmatic issues. In 154 sessions topics such as predestination and the new Dutch translation of the bible were discussed. The doctrine of election of the Remonstrants, who had risen to prominence within a sphere of tense political opposites, was dismissed. This copper engraving gives an impression of the seating order at the synod. The advocates of the Remonstrants were seated at the table in the centre where they had to defend their teachings.